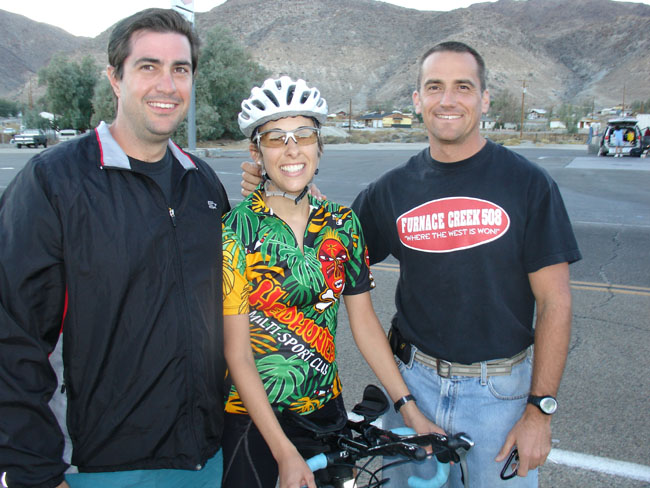 I am going to try to put into words, the feelings I have about the race and the community, amend that, THE FAMILY, that those who participate in the 508, become after just one race. It is not just the racers that I view as family; I extend this view to the crews and the race staff as well. Race staff perhaps even more so because without them we would have nowhere to go in October! This is my third 508. I have attended twice as a racer, and once as part of a crew. From the first, I knew there was something special, but I never really grasped the full gravity of that sentiment until I found myself on the support team for White Rabbit. Reinforcing the knowledge that Crew and Racer are a team, our team consisted of Joe Gargoyle Garza, Anna White Rabbit Boldon, and I, Steve Red Tail Hawk Scheetz.

Almost from the moment I met these two people, I felt a unique bond developing. Our relationship toward each other was flawless; there were no egos to deal with, we all understood, without saying so, that no matter what we did, our goals were as one, and that one was making it to the finish line in less than 48 hours. When Joe and I started working together, it was as if we had done so for decades. Anna, who NEVER did any more than 117 miles in her life, (her longest ride was not even this year,) found herself put in the position of being a solo racer for the toughest 48 hours in sport. Words can't truly justify the feeling one has the first time he/she does an ultra event, but the 508 truly is a daunting course to conceptualize. Going from 117 miles at one time to the toughest 48 hours in sport. I can't even imagine how she felt, but she handled it with a stoic confidence that was beyond peer.

Endurance athletes experience psychological ups and downs throughout every event, but it was my first experience as a witness to another person going through these challenges. However, Joe and I, having been there and done that, knew how to recognize the symptoms. We knew it, when she was becoming frustrated, not because we were told, not because we were psychic, but because we both KNEW those roads. We were, and I am positive that all of those who ever raced the 508 were frustrated at most of those exact same points!

We all climbed every figurative mountain, together. The worst at the top of Townes Pass, made me respect her that much more when Joe and I watched her get back on the bike and continue. Oh the downs were not finished, but we did have some really positive boosting when we reached Furnace Creek, and informed her that she had already doubled her previous record for the most miles at any one time!

During both days, every time we did a leap frog type of maneuver, there was always a smile on her face! For us, it was about saying/doing everything to keep her comfortable while continuing her trek forward. For her, it seemed to be about listening to our advice, our bits of helpful information related to the course, particularly at those times when she was starting to become frustrated.

At each time station, the race staff was terrific! They offered words of encouragement, and as we kept pushing forward, even though time stations were closing, they either came to check up on us, or they remained open and waited for us to arrive, even though they did not have to!

I stated earlier that everyone who is apart of the 508 experience, whether he/she knows it or not, is being inducted into the family, even from that first race. I remember watching Wolverine being inducted into the Hall of Fame, and while he spoke of his experience with hyponatremia, I never considered that about 40 some odd hours after him telling that story, I found myself in almost that same position, (minus the hospital and the coma part.) Thank you for that! While my experience sucked, I was fortunate enough to have a crew that listened (since I was completely out of it) I know his story saved me the trip to the hospital! If we are lucky, we are given the wisdom of the veterans. Anna trusted the words of two veterans, even when they sounded completely absurd. She took our experiences, made them hers, and by doing this, she pushed herself so far beyond where she ever went that she amazed herself, but more than that, she proved to herself, that she belongs in the ultra arena. She proved that she deserves to be on a bike, on the 508 course! How cool is that?

We operated as a team with a common goal, and even though we stopped in Kelso with the knowledge that we would not have made it to the finish line in 48 hours, Joe and I know that Anna should be proud of the accomplishment of shattering her previous personal distance record, and I believe I speak for Joe as well when I say that I am thrilled to have had the honor of being there to crew for her!

(in order from start to finish)

The pre-race breakfast buffet is a fantastic idea, and I hope it is repeated next year!

The people at the time stations were awesome

The crews and the fellow racers.. Well, we are all family, let's leave it at that! I have never experienced anything like it, though I hope this feel extends to the other events sooner rather than later.

I haven't been able to think of one, and I have had a nice long plane ride to attempt to come up with something!

Chris, I am sure I speak for everyone when I say thank you for hosting such a fantastic event! The work that you have done, over the years, just to keep all of the local municipalities willing to allow us to be there, is huge! I know from advocacy work what one has to do to make things happen, and to be making things happen year after year is truly a feat worth noting! Thank you SO MUCH! As for everyone else, I can't wait to see you all next year!!