I wanted to say thanks, for letting me be a part of this amazing one-of-a kind race! I felt very, very, very lucky to be in the Furnace Creek 508, and known as the kid that started with the "jansport school backpack, gym shorts, and mountain bike shoes." I loved riding through the night, loved the desert atmosphere, and loved being around other ultra athletes like me. Randomly, I must add, I thought that the organic cotton shirts were pretty awesome. I heard about organic cotton, and now I own a sweet, kick ass Furnace Creek 508 shirt, printed on organic cotton!

Mile 426, around 2:50 am Monday morning is were I had to make the bitter sweet end to end to all the hard work I had devoted to the Furnace Creek 508 race. 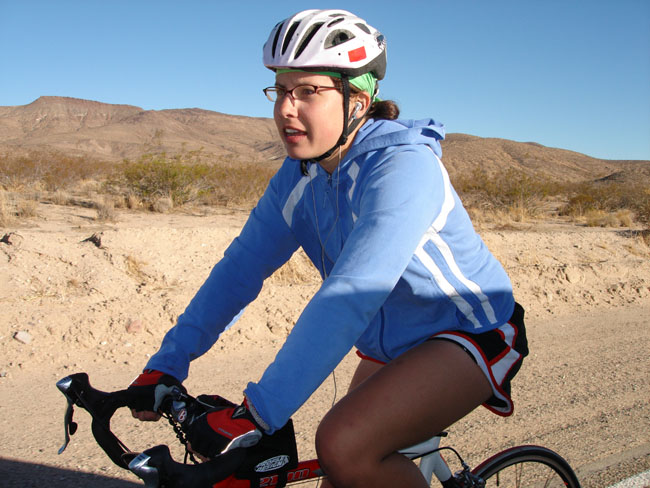 So what happened? Night came around on Sunday, and my feet had been tingling, eventually both feet had gone numb. It never dawned to me, that this could have started an issue. I've done 5k's, half marathons, and from training/racing these events I was used to blood blisters, blisters, and used to my feet bleeding from running. So, I didn't consider numbness/tingling a problem. (I knew I needed new cycling shoes, because my sister had helped apply extra Velcro to my shoes, and during MTB races I had to duct tape them shut, but I blew the idea of getting new shoes off). In addition, my knees started to become extremely tender, and it didn't seem important to me either. With running, I would have sore legs, and I could still get my body to perform at the level I needed it to, so I kept on going.

I had to ask my crew what the hell I was doing. My crew got freaked out! They pulled me off my bike...in tears they told me I was in a race. Being in a state of confusion I started becoming teary eyed "am I going to finish?" My crew just said we care more about your health than this race. Screaming at them, cursing them out, I yelled in frustrations as I got back on my bike.

People have to tell, and coax me to stop, that it's not healthy to keep going on in a race. In my mind, I don't really comprehend that I need to stop, I might be struggling, and I might hurt, but it's instinct for me to keep going. It's programmed into me that I have a point A, and I need to get to point B.

Well, the support van had seemed so welcoming during the day, but at night it seemed to turn into a coffin. The coffin van seemed to be waiting for my arrival, and I seemed to be cycling away from it at 2 mph. My crew seemed to be the grim reaper, that came out of the coffin van. They had to reason with me that I had next year, but when any ultra athlete knows that there only six hours away from the finish...they don't want to give in to the van coffin. Slowly my body went, and finally my crew said you need to stop, then the crew told me to get into the van. In tears yelling at them, hating myself, and them for not finishing...the coffin consumed my soul.

In the end I learned that the slowest races, i.e. ultra races...happen to be the hardest and most grueling. I always thought it was the sprinting races, the 5k, 10k, the half-marathons, the marathons, but I have to disagree. In those races, there is so much support, and the finish always is possible. Ultras bring a different sense of accomplishment, and each mile could end up being your last mile. I will be back next year, I don't give up. Next year all 35,000 feet of climbing can kiss my ass.

I PICKED THE HARDEST 48 hours in sport! YEA! I also had to come to realize that I am a 19-year-old female, that has Epilepsy, and am vegan. So, I had to learn to be grateful that I was able to complete what I did. Well, I might be new to the ultra-world, but I finally found races I love doing and I also learned that I am going to use a different ratio of cassette (no triple ring), pedals, and *smiles* buy road shoes (well I thought my mountain shoes would cut it, but I guess not). So what's next? *Smiles* For my main two huge cycling races next year, the Race Across Oregon can expect a entry form from me in the upcoming couple weeks, and Furnace Creek 508 will also get a nice entry form from me as well.