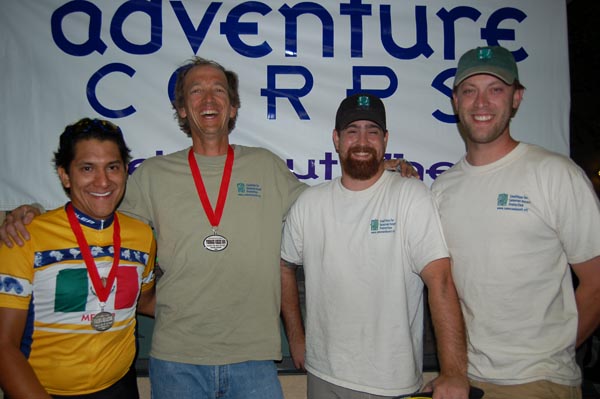 The adventure is over, the race is past now, and all the training, riding, planning and thinking is gone; but the happiness, the sense of achievement and the pain in the…legs, remain and grow with every one of your kind messages of support and shared satisfaction. I am personally very happy with the results of the race, but more than that with the group of friends I spent the weekend with and the work that we all did together to achieve this. There will never be enough "thank you" for each one of you: Bruce, Sean and Cory—and back in town: Kevin, Carolyn, Jenny and many, many more.

The race was phenomenal (tough, fun, cruel, insane, hard, inhumane, painful, boring, tiring, challenging, long!). There were a lot of ups (mainly my first stage) and downs (the tedious last stage!). Photos, videos, descriptions will not be enough to tell you all how this race goes, but you can be sure that I am feeling very happy for it al,l and maybe it has changed my life.

As a sports guy, I like numbers, statistics and data; so let me describe my ride:

I know: "data although interesting, is irrelevant." I don't have many words to describe the race; it's hard to even try.

I can say that before we left Tucson I was very anxious to get on the road and be in California already. When we got to California, I was anxious to be in the pre-race meeting and see the people who would be there. When I was in the pre-race meeting, I was anxious to start the race the next day, where Bruce would be ready to go; and when Bruce was on the start line, I was holding my tears and chewing my nails because I was really nervous for how the race would go. I always knew we were not doing it to win or set new records (although we set our personal record!), all I wanted was to know we would finish it and live to tell.

The race started, Bruce left the hotel in Santa Clarita, we saw him a couple of times on the road and before I was ready, it was my turn to go—Stage 2. It was windy, it was lonely, it was sort of scary, but it was fun! Especially when I saw other riders in front of me and worked my way to get them, be next to them and say good-bye to them. Bam!

To tell you the truth, I was showing off passing them fast, flying next to them, especially on the up hills. Zoom! It was even better when I passed them, ride in front for a while, stop to drink or eat (or un-drink/un-eat) and pass them again.

Bruce had the first stage at nighttime, and that was a killer: Townes Pass. We saw how he suffered, sweated and pushed to get on top of 5,000 feet of elevation. To see Bruce doing that climb was scary, but mainly inspiring. I could feel how painful it was, but also how committed and determined Bruce was to do this, in the middle of the night, wind strong winds and cold weather; I couldn't be less that that.

So I started my second leg (Stage 4), with renewed energy, at around 2:00 AM and rode for over five hours, passing through the second hardest climb in the ride: Jubilee Pass and Salsberry Pass (3,350 feet above sea level), after 40 miles on Death Valley, more than 150 feet below the sea level. This was PAINFUL ! 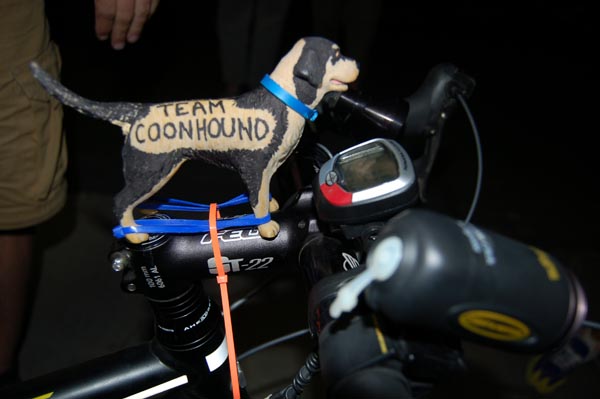 After that one…I was ready to quit! Out! No more! Basta!

But then again, Bruce got on his bike, rode and rode, climbed, rode more…and left the baton to me (our cool Coonhound on the bike). My knees were in pain; I could barely walk or sleep (between Nirvana or The Rolling Stones and Cory's and Sean's laughing, it was hard); I didn't want to eat; I was leaving my "comfort point" behind (actually, my behind was the least comfortable place), and then, I asked Bruce: "I guess this is why they say it's more mental that physical, uh?"

I took off for an easy 35-mile ride through the Mojave Desert—Stage 6 (while training, 35 miles used to feel like a walk in the park). I tried to distract myself from the ride, looking for Mojave desert rattlesnakes on the road, but it was inevitable…there was a 20-mile climb in front of me. I guess I managed to finish that one, but the truth is…right now I don't remember where I finished or how.

Bruce rode his last Stage (7) and then, it was all up to me. I checked my mps, reviewed my information and realized…I had 60 miles to go…still!!! Some people said to me: "estimate 4 hours for this one".

What? Four more hours on that seat? That road? That f***ing bike? It was 5:00 PM on Sunday night; I was in front of the last leg of the race: tired, with a stomachache and angry! I was ready to quit (again).

But when you've been on your bike for 180 miles in two days, not much sleep/food/bed, a rolling slight uphill is…HELL!!! It never ends, it's stupid, and it's insane! Three or four miles from the end, my team was driving next to me giving me instructions like: "turn there, go 1.5 miles, up the hill, turn right at the light." I have to say, I just wanted to get off the bike, lift it, and throw it at them and make them ride it to the end! But I didn't. I saw the hotel sign, I saw the people on the front and I gave all the speed left on my legs (maybe it was something close to 5 miles an hour).

We finally ended the race in less than 36 hours. I think I was smiling, joking and asking for water. I don't remember all the details, but what I know is that the best moment at the end was not getting pictures taken, congratulations from the people around me or a nice, heavy-medal from the organizers: it was having the team, all together, coming to me and hugging each other, with huge smiles in their faces, happy to be there.

When I lived in the mountains of the Sierra Madre, in Chihuahua, I got to see some of the most beautiful landscapes I've ever seen (Copper and Sinforosa Canyons). I left, and what I missed the most was the people: the humble Tarahumara Indians from whom I learned so much.

When I lived in Sonora, I worked very hard to achieve something that other people were unable to do: trap a jaguar (actually trap two of them!!!) as part of the researchproject. That was a great personal achievement, but when I left, I missed the cowboys and all the people I shared and lived with.

This past weekend I learned that I can keep doing and pushing myself to certain extremes and that with determination and strength (and lots of Accelerade) I will get to some points that seem to be over the limit. I am satisfied with this achievement.

But what I like the most was to be with my good friends, with the team that made it all possible, and the people that invested themselves in a long, hard, suffering and unknown adventure that was there with me in the beginning and at the end; during daylight and nighttime; awake or sleeping; happy or mad, they were always there.

Thank you guys, I had a great time.

Just a little piece on each one of them…

Bruce: "this guy is a monster"—Sean, while Bruce was climbing Townes Pass on Saturday at midnight

Sean: "he is a responsible, serious, hard working guy—Jenny, describing Sean to her parents; "I like him because he laughs a lot"—my brother, Hector, during his visit to Tucson.

Cory: he is one of the "dudes doing what dudes do, dude!"—Cory, about Sean and himself throwing rocks at a bottle on the side of the road.

Just to end, I have received calls and messages from a lot of friends and something I've heard a lot was the remark of my smile at the end line. About that smile I want to say something: besides the emotions I described above, the happiness of finishing and being with the team; what made me smile was (in no order):

To have the Mexican flag with me all the time; Mexico in my head as my motivation. My country gave me a lot more energy than any other drink, food or image. Those Mexican soldiers coming across the border to help in the hurricane relief; those migrants that come across the desert to support their families; those under-7 soccer players that won the World Championship two weeks ago. My brother's and my Dad's voices, talking to me at the end, when I couldn't pedal anymore. My lovely girlfriend, with her lovely smile and voice, waiting for me at home.