The Race This Time

This race can become an obsession. If not like the feverish passion of Humphrey Bogart in 'Treasure of The Sierra Nevadas,' then like the dangerous, simmering obsession of William Hurt in 'Body Heat.' You can lose friends and business over its demands. Maybe even commit crimes on its behalf. It can consume your year and dominate your thoughts like nothing else. And when the ride finally starts, there's no letdown. It's not anti-climactic. It's the real thing. It's everything they told you it would be. More.

THE RACE THIS TIME

This was one of my good runs. This time it felt a lot more like a race than a survival adventure. And except for my heat problems, this was a conservative, textbook ride. I came through TS#1 in 38th position. But with the help of course attrition and a crack crew, I found myself in 20th position 29 miles from the finish. By the time it was over, I was a surprising (considering my snail's pace progress through the mid-day heat of Saturday and Sunday) 17th overall out of 46 solo starters.

I came into this year's race well prepared. I had a good mileage base, albeit slow miles, consisting of a full brevet season culminating in the towering effort of the new 1200K Gold Rush Randonee. I managed some, but not a lot of, race-specific training.

I also had a preeminent crew consisting of Andrew "Blowfish" Bohannon (last year's overall '508 winner and RAAM veteran), Kristen Ursin-Smith (Andrew's RAAM and FC508 veteran crew chief), and Marie Montiel (triathlete and 3-time Ironnam finisher). These guys were a crack team. These are not people you want to let down.

It also helped that I wouldn't be able to expect much coddling from Andrew:

We kept the focus on moving the bike and being competitive. We had one productive overnight training ride behind us that helped uncover a few problems and helped us to learn

CLOSE TO THE EDGE

Up until Sheep Hole summit I just rode my bike and tried to stay ahead of the feeding schedule. I have been bitten too many times on this ride to assume it's in the bag just because I reach a certain mileage point. Even though I was several hours behind my objective, it wasn't until TS#7 that I was sure we had made it.

Coming off Sheep Hole with 28 miles to go, I was planning to use what I had left to hold on to my position to the end. So, I cranked it up to what I thought I could hold for an hour and a half and settled in. It wasn't comfortable, but it was close to the edge of my abilities and it would use everything I had left. Feet burning, butt burning, bladder bursting. Flashing lights far ahead.

Scan the night horizon for Twentynine Palms. Nothing, just stars and some scattered lights. Too far out I guess. The crew's disco tape pounding over the one-way intercom. They're sick of my music and I'm actually enjoying the nostalgic kick. That Andy Gib thing, "I Just Want to Be Your Everything," is still ringing in my head. Sweet song, cool beat. Nothing like this groove within a thousand miles.

I had no idea who was behind me and I'd forgotten about those in front. The cool of the night and the pull of the finish were all my senses needed. I didn't want to stop again and lose a position, but my bladder was starting to talk. Then, just as I was about to pull over for a quick pee break, I noticed that the lights ahead were getting bigger. Hummm, maybe a chance to move up a notch? Yep, definitely bigger. They crested a rise and disappeared. By the time we topped the same rise, we were upon them. I passed. It was that tenacious and consistent Ron "Worm" Way. I'd been seeing him all along the course. In fact, I'd seen him at rides all year. No surprise about his performance. Incredible.

I needed to maintain my speed for a while to make room for the crew van and to make sure I didn't get passed by Ron or whomever might be behind him.

"Don't slow down now Perry," Andrew warns over the channel. "Keep it going." I signal that I need to pee. "You'd better pee off the bike," he said.

You've got to be kidding, I thought. He wasn't. And then Andrew repeated, step-by-step, the "procedure" that we had joked about so many times before. But this was no joke, I had no choice, so I gave it a try. Caaaareful, caaareful... it worked! I'm doing it and I don't believe it! Talk about a finish with a flourish.

"Way to go Perry!" Andrew yells. "First attempt and you did it, man!" I'm glad we're not using a loudspeaker.

"Were so proud of you!" blurts Kristen, or Marie, or both in chorus. I don't remember.

I'm thinking: What-is-wrong-with-these-people? Has my race been so boring that they should find joy and elation in so base an achievement. (I must admit though that I was quite pleased with this new tactical weapon--no pun; metaphor--to add to my cycling repertoire.) If only you could have seen me...

"Okay Perry, better turn off the spigot, they're getting really close now," Andrew said with some urgency. Fortunately, I was done. In seconds I was back on pace with two new sets of headlights ahead and less than 15 miles to go. What the hell. 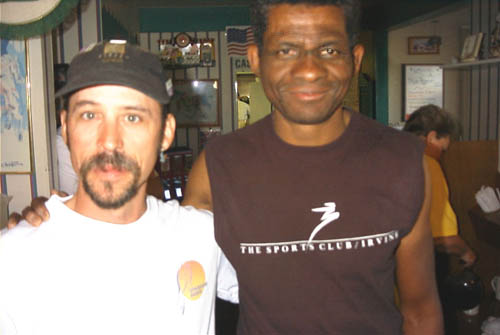 Birds of a feather flock together: Swan and Sparrow Hawk after the big race.
Photo by Lynn Katano

As I gained on the next rider I intended to wait and watch to try to determine if this is someone who's just cruising and could strike back if I passed. But we were gaining so fast that I just increased cadence and swept by. It was Snow Kitty, strong and steady like I'd seen her since the climb to the windmills way back before TS#1. Now there were more van lights less than a mile ahead.

Momentarily the lights on the van ahead simply disappeared. We thought for a moment they may be deliberately running dark to eliminate our point reference. Those snakes! (Little did I know. But then they reappeared as the road flattened ahead. No time for waiting and watching now, we'd be reaching the turn at Utah Trail soon. When we finally caught them, I went right around. It was Sidewinder. He looked pretty strong. I went right up to my aerobic threshold and focused on the finish. Until he finished 10 minutes after me, I had no way of knowing he was riding a single-speed rig.

We had a moment of panic when a local cop flashed his lights and asked what was going on at the right turn onto 29 Palms Highway. We thought he wouldn't get it and would then hold us there for a dissertation un ultra-distance cycling while making our recent gains null and void. But he was brief and we had barely paused at the turn. (No, that's not true. We came to a complete stop.)

And as to why I, or anyone, would come back to this race year after year? There's no good explanation that will reach those who've never seen it or done it. For those of us who have, no explanation is needed. You simply get to within 25 miles of the finish and you start thinking, through the pain and pleasure, of how you might do it better next time.

You've seen this beast before
—Brutal and sublime
But like a force of nature, you return
Defiant and unbroken
Like weeds in the metropolis

I had hoped I would get a better time this time around, but I rode conservatively and I still have mid-day heat problems. My output drops significantly starting around 11:00 AM and doesn't start picking up again until around 5:30 PM-6:00 PM, when the sun starts to go down. From then on I'm strong throughout the night and early morning. It's a frustrating handicap, but if I can overcome this problem, I may be able to cut a few more hours off my ride.

How many times now, six? Six times I've started the FC508. I've had two successful finishes. Four times I've DNF'd, and I take no shame in any of those. It's an offering as much as a blessing to reach so far. It is a constant reminder that it takes everything you've learned--patience, discipline, and extra effort--to succeed at a truly monumental task.

Birds of a feather flock together: Swan and Sparrow Hawk after the big race, photo by Lynn Katano